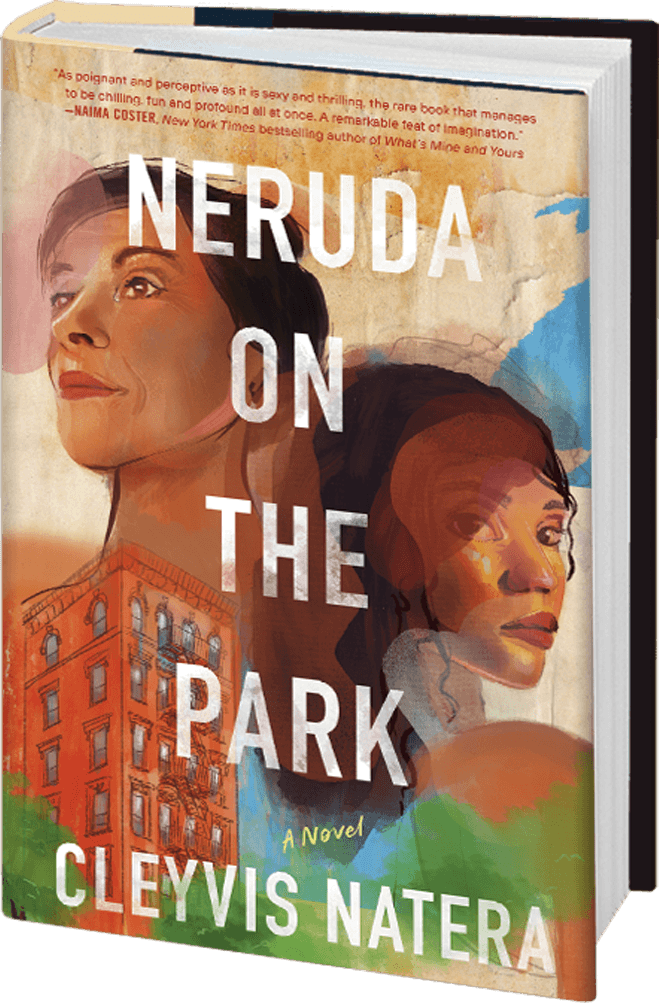 *The New York Times, “10 New Books We Recommend This Week”

*Parade, “On Her Shelf: Emily Giffin on Her New Kennedy-Inspired Romance and Some Sizzling Summer Reads”

*The Today Show, “5 books to read this summer, according to bestselling author Jasmine Guillory”

*The Today Show, “From a beach read to an honest memoir, here are 5 books to read in May”

*GMA by Zibby Owens, “15 new reads to add to your reading list this month”

*ELLE, “21 Must-Read Books To Pick Up This Summer”

*The Today Show!, “What to read this summer: ‘Neruda on the Park’ by Cleyvis Natera”

*TIME, “New Books You Should Read in May”

*Booklist, “Neruda on the Park By Cleyvis Natera review”

*PopSugar, “15 Books by Afro-Latinx Writers You Won’t Want to Put Down”

*Entertainment Weekly,“Authors pick their most anticipated books of 2022”

*The Millions, “Most Anticipated: The Great First-Half 2022 Book Preview”

*Forbes, interview, “‘Neruda On The Park’ Author Cleyvis Natera On What We’ll Do To Protect What We Love”

*The Brooklyn Rail, excerpt, “Fiction:  Neruda on the Park By Cleyvis Natera”

*Refinery29, interview, “Neruda on the Park Gets the Story of Gentrification in Latine Neighborhoods Right — Finally”

“Earnest, provocative…this is also a love story, and love — profound, mundane, imperfect — so warmly suffuses the book its pages practically glow with it…Natera’s style is refreshingly direct and declarative… confident and sharp, a mirror capturing the bleak comedies of life in a threatened community… “Neruda on the Park” avoids pat answers, but tenderly and thoughtfully invites readers to weigh our own obligations to the places and people who made us.”
—New York Times Book Review

“Immigrant families know that “home” can mean something different to everyone, even those living under the same roof. Cleyvis Natera’s debut novel, Neruda on the Park, explores the sacrifices we make for the people and places we call home. I hope you’ll find this thrilling, beautifully-told debut novel the perfect companion for warm summer nights.”
—Mala Yousafzai, Literati July 2022 Book Club pick

“This is a story of a mother and a daughter, a family, a neighborhood, a community, and two countries,” Guillory said. “There’s romance, and many secrets, but most of all, there’s a story that grabbed hold of me as soon as I started reading, and refused to let go. This book took me on a huge journey, and I can’t stop thinking about it.”
—Jasmine Guillory, The Today Show

“I choose this book for its immersive storytelling, spell-bounding family drama, for its verve, spirit, and for its bold tackle of the concept of home. . .This book will make an excellent travel companion and in the best possible way, it will make you forget you’re even at the beach by drawing you into its world.”
—Weike Wang, The Today Show

“The inventive structure makes Cleyvis Natera’s debut novel immediately stand apart from others. . .Told from the perspectives of Luz and Eusebia, and written over 15 years, “Neruda on the Park” is a creative, original work.”
—Zibby Owens, GMA

“The impacts of gentrification—and generations of shifting social status—ignite a fascinating ripple effect in Cleyvis Natera’s debut Neruda On The Park, in which members of a Dominican family in New York City clash around the wealth (or lack thereof) that defines their choices. Exciting but nuanced, this is a book you’ll want to race through, then pick up and start again”
—Elle

“Natera spent 15 years writing Neruda on the Park — and her care and thoughtfulness shows.  The novel takes on the issue of gentrification with grace and refreshing truth.”
—Refinery29

“[An] extremely buzzy debut novel for its compelling story and lyrical prose.”
—Goodreads

“Natera deftly explores what it means to call a place home—especially when that place is under threat.”
—TIME

“Natera’s sensitive portrayal of the tensions between immigrant parents and children will appeal to fans of The Book of Unknown Americans (2014) and Transcendent Kingdom (2020).”
—Booklist

“Natera plays with definitions of home and material and spiritual success, showing how the personal and political can become confused even when a cause, or a crime, seems straightforward…A savvy melodrama, warmhearted and as astute as a lawyer’s brief.”
—Kirkus Reviews

“I have a sweet spot for debut authors and every year I keep an extra eye open for their titles…so, when Naima Coster shared her excitement for Neruda On the Park, I immediately added it to my TRB.’ Aquino added that this novel covers the themes of family, friendship and cultura (culture), which are ‘everything I love in a novel.’”
—The Today Show

“I’m a firm believer that one cannot separate art from politics, no matter how hard one tries. So when a writer accepts this and leans into the connection, I think what is eventually produced is the kind of magic that creates a classic, canonical work. I think Cleyvis Natera’s extraordinary debut about displacement and discovery, family and rebirth, will cast just that sort of spell. There’s so much complexity to mine in the Afro-Dominican tradition, and I’m excited for what she will reveal.”
—Robert Jones Jr. For Entertainment Weekly

“Natera’s debut novel follows the Guerreros, who live in Nothar Park, a largely Dominican neighborhood of New York facing gentrification. Moving from Eusebia, a community elder who schemes to prevent luxury condos from encroaching on the neighborhood to her daughter Luz, an associate at a Manhattan law firm, the novel is a tapestry of family, love, sacrifice, and loss.”
—Lit Hub

“Neruda on the Park is a mother-daughter story about a neighborhood trying to keep gentrification at bay. It involves the creation of a crime ring to make the neighborhood less desirable to newcomers. It is unlike anything I have ever read before. It’s thrilling, but it’s also a family story, so sensitive and beautifully told. It’s that rare kind of book that can be chilling, but also moving and fun.”
—Naima Coster in Entertainment Weekly